Apartment Living – why you really hear your neighbours upstairs 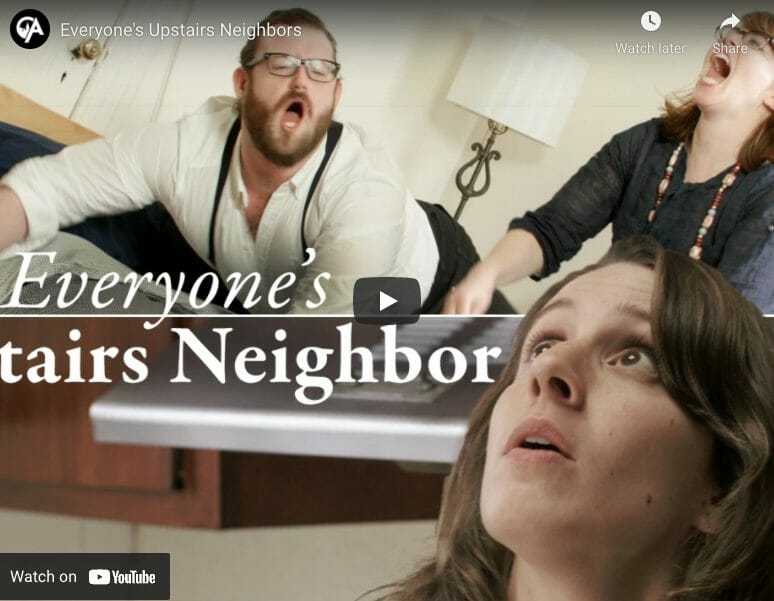 Live in an apartment with noisy neighbours upstairs? Ever wondered why it sounds like they’re playing marbles up there at all hours?

This video might just sum up apartment living in Melbourne pretty well.

The majority of the acoustics industry feels like the Building Code has been playing “catchup” for a while now on what minimum acceptable amenity should be with respect to floor construction and impact sound insulation. A recent change to the performance rating in the 2016 edition of the National Construction Code (deleting the ‘Ci’ correction term that was previously applied in earlier versions) was met with a heavy sigh of relief from most in the acoustics industry. But…

The change probably brings as many foibles as it does benefits. Yes, it does now mean that we get a more apparent improvement, when installing resilient layers on concrete slabs. Yes, it may result in less errors occurring in some site testing, especially small rooms which are prone to uncertainty in lower frequencies. But what does the deletion of the Ci term actually mean for how test results relate to the everyday perception of impact noise experienced whilst living in an apartment?

For those unaccustomed to acoustic testing, impact sound insulation tests are carried out using an instrument known as the ‘ISO tapping Machine’, which for the layperson is simply a set of rotating steel hammers that fall and strike the floor surface at a fixed frequency during testing. 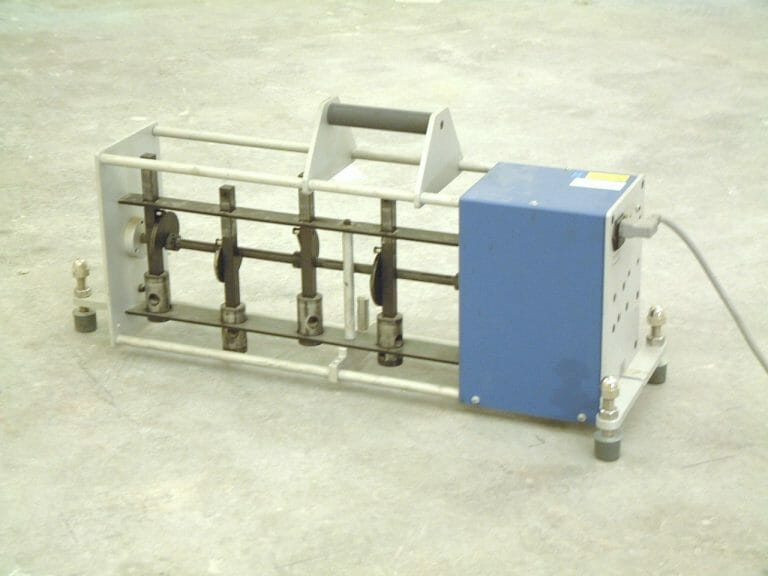 While the ISO tapping machine provides an easy and standardised means to obtain repeatable test results, the machine was never designed to simulate footsteps or any other particular (i.e. real) source of impact on floors (whether that be furniture moving, washing machines or… marbles?). The character or spectral content of the signal generated by this tapping machine is quite dissimilar to that of somebody walking or dragging furniture. Because of this, the resultant noise from a tapping machine has a complex relationship with how real day to day impact sources are evaluated by those who are actually exposed to them – residents. Importantly, the relationship is made even more complex once we consider different types of floor construction, and in particular, how we relate the character of impact noise to different forms of structure. You may ask, “why not just test with real impact sources such as somebody walking?” While that would be ideal, a practical test using such methodology would not result in repeatable results (other than for highly controlled experiments).

Most people intuitively know the difference in sound between footsteps on timber joist floor structure and footsteps on concrete slab. The former is a ’thumping’ noise (lower frequency) and the latter a ‘tapping’ noise (higher frequency). This is why the Ci correction term existed in previous versions of the Building Code, as an attempt (while not without its flaws) to bridge the relationship between the test method and real impact sources on different floor structure types. The jury is still out in some countries as to the inclusion or exclusion of the Ci term and to be fair, this discussion probably matters less where one particular type of structure represents the vast majority of construction subject to the respective building standard or code. One thing that is clear though is that typical real life impact noise sources (such as foot fall) a more of a low frequency problem which explains some of the inconsistencies between use of the ISO tapping machine on different structures.

Multi-storey residential buildings have traditionally been the domain of concrete structure and perhaps this is why there appeared to be (almost) unanimous support in the Building Code revision, as a way of getting a better performing floor without actually changing the performance rating figure. However, there has been a recent trend  toward the use of lightweight floor structures such as CLT (Cross Laminated Timber) in large multi-tenancy and campus style buildings. This is a trend that looks set to continue as both an economic and technical viability with incentives such as sustainability and rapid construction programs. Structural timber (and steel) are increasingly used in impressive ways that may not have been possible in Australia not that long ago. This has a direct flow-on effect to how noise and vibration is perceived in buildings.

So, how do we then compare the impact sounds such as the “thump” in a timber or lightweight building to that of “tapping” in a concrete building? Or how about the “ring” of a steel structure? What about complex hybrids of these materials? What happens if you get the same test result in two buildings with different structures, assuming both are compliant with the new version of the Code? Would real impact sources such as footsteps sound the same to the respective residents of these different buildings? Does the deletion of the Ci correction term from the Building Code now allow floor covering manufacturers to take advantage of the test procedure (because rating improvements are more difficult to demonstrate with the correction included)?

Many in the industry had argued that the previous Building Code allowed builders to take advantage of how bare unfinished concrete floors performed with the Ci Correction. After all, there is a natural instinct to assume that resilient layers should reduce impact noise levels from real life sources when they make such an audible difference when testing with the tapping machine… but again, the tapping machine is not exactly representative of most real life sources of impact – unless your upstairs neighbor is the ghost of Fred Astaire.

Whatever the consequences, I know which building I would rather live in if, all other things being equal, both the concrete and timber buildings had the same rating under the Building Code revision. It is extremely unlikely that any subjective evaluation would return a result in favour of lightweight in the above scenario.

Practically speaking, the majority of buildings already surpass the minimum requirements of the Building Code, often COMFORTABLY (that goes for both the previous version and the most recent version of the Building Code). This has probably resulted in similar quality products for both Owner Occupied and Investment Property markets, which is perhaps another topic of conversation entirely which we can leave for another day. Years of site testing confirms this.

So, we shouldn’t necessarily expect the Code change (that is, the deletion of the Ci correction term) to result in any significant change in amenity being passed onto all residents in new buildings. What the change does signify, and the real kicker is, if you are considering purchase of an apartment in a new building, you should not expect the same impression of floor quality for a lightweight structure to that of concrete when evaluating real sources of impact noise. Even if both have been deemed to have the same Building Code referenced test result.

While many in the industry will see the Building Code change as ‘cracking the whip’ on concrete structures in the future, let’s also keep an eye on what it means for lightweight structures in 2017 and beyond, especially as they begin to play a bigger role in high-rise living.